(Awen arising from hiding, everything binding) 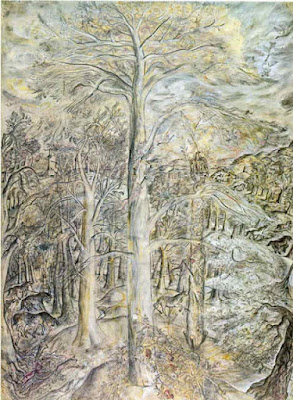 
I have pointed out elsewhere[i] that the deliberately naïve presentation of Jean Earle’s verse often disguises a quite sophisticated depth of reference. In an earlier article[ii] I pointed this out in the context of her imaginative recreation of material from Dorothy Wordsworth’s Grasmere Journal in a poem from one of her earlier collections. She re-visited that theme in a later volume after the article was published. But here I want to look at the poem ‘Sir Bedivere’s Horse’, published in her penultimate collection The Sun in the West (Seren, 1995) in which she draws upon a response to a visual image by David Jones known as Vexilla Regis. This image is itself a work that asks its viewers to take a leap of the imagination in interpreting it. For David Jones that leap involves an act of faith, or at least it requires some accommodation to religious symbolism. Jean Earle requires of us something rather different. Her apparent starting point was not the picture but Malory’s Morte d’Arthur in which, in her epigraph to the poem, we are told “the knights free their horses to graze at will”. When she does come to David Jones it is not so much to religious symbolism but that he “ … dreaming … / painted the souls of trees”. This is an engagement with the image that comes immediately to terms both with its dream-like quality and, at the same time, the depths of its visionary imagery, though it sidesteps the symbolic frame of reference to attempt a direct perception of certain natural qualities.

David Jones’ starting point – as is usual in both his writing and his visual art – was to produce a layered work in which different symbolic patterns interact with each other to produce a complex response in the viewer who might contemplate one or another of them at different times, though they would all combine in the continuing view of the work. Such was the working method of the school of modernism in which he worked, though carried out here with a particular intensity. The image was the culmination of several drawings of trees produced in the late 1940’s when David Jones was recovering from a nervous breakdown. This culminating drawing has the addition of water colour to put flesh onto its pencilled bones. It also goes beyond being a study of trees as it links them to symbolic associations, seeing the three foregrounded trees in the depicted forest as the crosses on Calvary Hill. Jean Earle was, of course, aware of this and was probably working from David Jones’ own commentary on the work first reproduced in Dai Greatcoat [iii]. There he gives the reference to Malory that Jean Earle prefaced to her poem. His commentary also explains the title of the image as emanating from a fifth century hymn from Gaul beginning “Vexilla Regis prodeunt …” (forth comes the standard of the King). Other layers of symbolism are also elucidated in this epistolary response to a friend who had enquired about the work; he also suggests that none of the explication is fixed or definitive as the ideal response is one that is flexible.

So Jean Earle does not stray as far from engagement with the image as might appear. Her “painting the souls of trees” seems to look behind these symbolic patterns at something more fundamental, attempting to identify inherent rather than cultural significance. The subsequent assertion in the poem that one of the horses grazing in the woodland is Sir Bedivere’s horse and that “I was Sir Bedivere’s squire” leads to a fantasy narrative focused on the freeing of the horse and its subsequent recovery from “a tangle of witchwood” (as in the drawing?). This brings us back to Malory’s text and also touches other sources in David Jones’ visual art in such lines as “Where the Honddu, in a rushy foaming / Hurries its little fishes” which echoes watercolours made by the artist both of the Honddu and of horses grazing in the hills above the river. The central narrative of the poem is brought to an end with the return of the squire, but the final stanza is the following italicized postscript:

Such whiffs of medieval spice
David Jones loved: yet his fey brush
Deft with the running shapes,
May not have known –
Through the layered myth –
Which was Sir Bedivere’s horse.


How should we read this? Certainly there is an element of mischievous naïvety here which was a strong thread often emerging from the fabric of Jean Earle’s late verse, written when she was in her eighties and early nineties. Should we also take “May not have known -/Through the layered myth -” as a criticism of David Jones’ working method? Certainly it draws attention to a contrast between what might be seen as a laboured and self-conscious making of a work of art replete with symbolic references, and the more fluid and apparently artless constructions that characterize the poetry of Jean Earle. If David Jones aimed at depth and density, Jean Earle’s achievement is rather one of lightness and fluidity. So appearances may suggest. But David Jones’ insistence on flexibility of interpretation also suggests that the fixtures of his carefully arranged landscapes (in words or in paint) may be more fluid than the commentaries that are often supplied for them. So we should, as asserted by his ‘Lady of the Pool’, abandon "metaphysical certainty" and live with her affirmation that "you never know". Could that horse really be Sir Bedivere’s horse? Jean Earle has made it clear that, for her, naïvety is a strategy of presentation and “a way to truth” [iv]. Her preferred trope is metonomy rather than symbolism. The insistence that the horse can be an identifier of a particular horse, and beyond that of its rider, gives it a location and marks a point of connection to Malory’s tale which is more than simply a wilful fantasy. It enlivens a narrative, bringing the horse into the present alongside the vital trees among which it grazes. Certainly, her verse is much more likely than that of David Jones to be inspired by an occasion; here, perhaps, viewing a reproduction of David Jones’ painting or reading his commentary on it. Her religious affiliation, though nominally Anglican, tended more to the instinctive and the pantheistic [v], while David Jones’ Catholicism drew more formally both on Christian symbolism and layers of myth which had preceded Christianity. On the surface, the two could not be more different and there is no denying that, beneath the surface, they were made of very different artistic stuff. But as their entanglement in this poem shows, their differences can be matched by a common sense of purpose in seeking the significance of things.

What do you think?